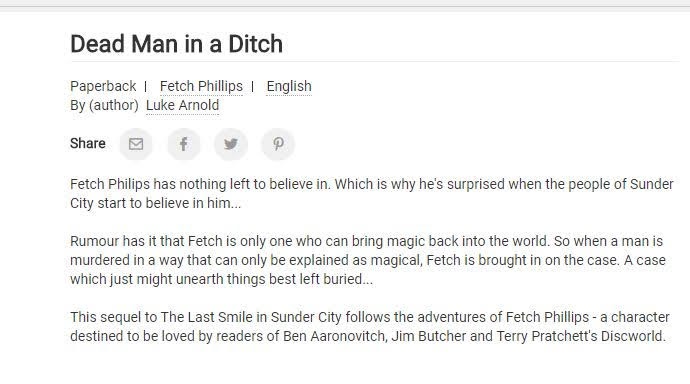 «A former soldier turned PI solves crime in a world that’s lost its magic in this brilliant sequel to actor Luke Arnold’s debut The Last Smile in Sunder City.
The name’s Fetch Phillips–what do you need?
Cover a Gnome with a crossbow while he does a dodgy deal? Sure.
Find out who killed Lance Niles, the big-shot businessman who just arrived in town? I’ll give it shot.
Help an old-lady Elf track down her husband’s murderer? That’s right up my alley.
What I don’t do, because it’s impossible, is search for a way to bring the goddamn magic back.
Rumors got out about what happened with the Professor, so now people keep asking me to fix the world.
But there’s no magic in this story. Just dead friends, twisted miracles, and a secret machine made to deliver a single shot of murder.
Welcome back to the streets of Sunder City, a darkly imagined world perfect for readers of Ben Aaronovitch and Jim Butcher.»

All what i write is personal.