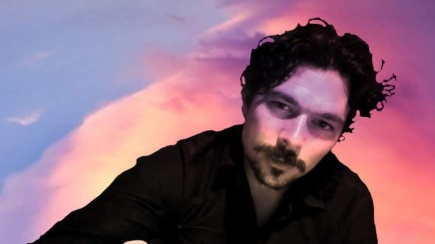 At me still astonished of what you was looking at. What you was feeling, it was surrounding the apartment, and that gaze, by now, I knew it, and each time you was looking at me in this way, it was for a special reason: the reason was a kiss that you wanted give me.
You approached yourself to me and slowly your lips lay on mine.
At end you have whispered: “Without you, I would have not did such great experiences as those I’m doing”.
I looked at you in the same way, and I replied you with a sigh caressing your face.
“…if I wasn’t fallen that night” without complete the sentence you have said: “Daria, I love you much”.

We were again entered in our dimension of wrapping sensations, when from outside, we had hear the shrill laugh of the Little One and the voice of Bathuè: seemed they were chasing each other.
We went to the window, we had saw them play, and The Little One in that instants had lifted his colourful face, and he saw us and he greeted us.

You came behind me embracing me my belly: I would wanted stay in this way forever, but you have said: “It’s better we go down” and, always amongst your arms, I turned round myself, and our foreheads touched one another.

We were still wrapped in that atmosphere since when we got back in Our Parallel World, but in someway, we had to shake us.
Sweetly you taken my hand, then we went down, and opening the door and who we had found in the meadow were Bathuè and Little One: were became good friends, and we were happy for that.

Now that we were came out all our guys were reuniting around us and as always we have done, we had started to speak, but this time we had asked to Bathuè to begin to tell his own story, and we had said him: “Start when you want.”

We knew the story that Bob told us, but we didnt knew from which point he knew it, so when he has began we threw away the air from the lungs and we had start to hear his story with our guys.”