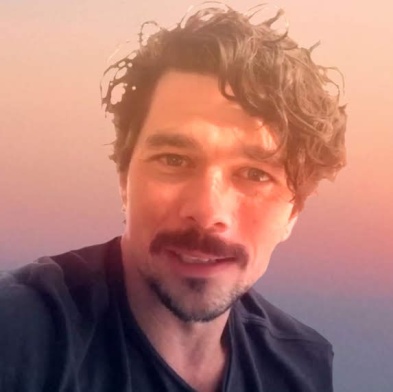 Away the air from our lungs, and slowly we had pulled from our pockets the little sticks.
For a bit we remained to look at the Blue City in his whole beauty, and at end we had looked Bathuè, and at end we entered in that alley.

Right there, we had forgot how to activate the little sticks, but all in a sudden, when they were approached one another, a sparkle in the wall at the end of that little alley, had open, and slowly we were sucked inside.

I had taken the little paws of Bathuè, and you had wrapped me with your embrace: for a long instant I had remember how it was sweet, and sensual to be embraced by you so. You had feel my sensations.

During that push, I tightened Bathuè, but what I was feeling more it were your hands that were holding me, and I was thinking at your hands on my body.

In that return journey, our minds were connected more than ever, and the twirl of thousands of colours had amplified our connection.
Occasionally we looked at each other.
I turned round toward you, and your lips had almost touched my mouth.

Our desire to kiss us was became strong, but we have couldn’t kiss us, until we wouldn’t landed in our shack.
Your hands tightened me always more, and I could feel your desire has growing in the middle of my thighs.

Like the journey toward the Blue City, the push got slow when we were about to enter in Our Parallel World, and right after we fallen on the topsoil of the shack, making fall a lot of stuff next to the wall where there was the crooked mirror.

In fallen you has been able to spin yourself to fall first, and making me slide on your body, and Bathuè has softly landed.
We remained so, for a bit: embraced tight, while Bathuè was already wandering in the shack, looking at himself around astonish.

We were still on the ground.
We were landed safe in Our Parallel World, and that sensation had wrapped us didn’t wanted left us.
We were looking at each other as we never looked at each other before.
They were just seconds, but in those seconds there was a emotions twirl: our heads were exploding together our hearts.

You broke that moment caressing my face, asking me with your sweet deep voice: “Everything alright?”
I was looking at you in silence, while you was still wrapping me in your embrace, by now, laid one on the another.
I approached to your face. Our foreheads touched, and slowly, as two calamites, our lips approached, and sweetly we given one of the delicate and passionate kiss.

After we broke away I sighed: “Now is everything alright…”.
You have looked at me, and with your sweet smile, you have said me: “How much i love you”.

Bathuè was looking at us smiling.”

You can also find me here ⤵