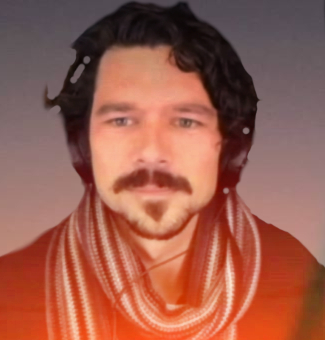 Was staring as the most beautiful person that you had ever met, and in someway, I was.
You have closed the door, taking my hand, and at end, after a long, and silent glance, you have sighed: “I’ve prepared something.”
We went in the kitchen, and we had breakfast.

In our minds, we have relived everything, without say nothing: it was enough see our eyes and there were all our emotions, and they were great.
The shack, Blue City, your embrace, your words, our hearts that were beating at unison: our magic locked in our magic bubble.

After have eat something, I have said you: “I want return in the shack…” I hoped to find some track of Blue City.
We came out from the apartment, where we have found Fenkuz and our friends who wandered in the meadow.

Pyr was still sleeping: he was still resting. The light he had released it had make him weak, and he have to recover many energies.
Fenkuz didn’t have understand the reason he was still sleeping.
We looked at them, while we were going toward the shack.
Going thought the bridge, I’ve stopped, right after I sighed: “We should say it them”
You nodded.

We have opened the door of the big shack.
We entered, and for a long time we have forgot it: we wandered inside it, above all me.
You was sit down on the bench, looking at me.
There were no even signs of our magic bubble: not even the book from which we had saw the whole scene it has been put in order.
Maybe the mirror was the only thing still not straight.

Slowly I went in front of it.
From very far I could hear a strange hiss: if I was concentrated me more I have could see, even the shadows of the people walking in Blue City.

I stared the mirror still not straight.
“Luke come to see..” I sighed breathless: you got up, and you have embraced me from behind.
“Listen. … Look… there.”
Even you have heard that hiss, and you had see, as me, the shadows of the citizens of  Blue city.

I was about to put straight the mirror when you have take my hand saying me “Don’t do it!’
I turned toward you, and you have continued: “It was, already, crooked the first time I’ve seen the jump…it will have an own reason”

I have lost myself in your eyes that I had forgot what I was about to do.
You have embraced me tight and then you have lifted up my face toward your: you have smiled.
We looked at each other.

Slowly we returned to stare the mirror, and there was a thing that we wanted to do: to touch it, but we have didn’t make it for fear to upside down all balances of our world.

Firstly, we have decided to talk to our friends.”