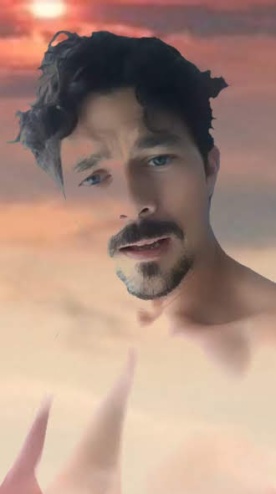 Still wrapped by our crystal light. We given ourselves that kiss with a sweetness never felt before. Slowly i took your face in my hands and for a minute, we remained staring eachother. Our breathe increased. Your hand slowly has started to touch me delicately my shoulders till get down my chest till reach my hips. Our glances didnt take off one from another. We were as hypnotized by eachother. You was next to me, but sweetly yu putted yourself above me. Sweetly your hand was caressing my legs, that i was slowly opening. I have close the eyes while i have took your hand and i was directing it, there in the middle. Sweetly you have take me off the underwear, and i moaned when i felt your finger got inside me. I wanted see you, so i have opened the eyes and you was looking at me. You was waiting for to kiss me again. Our lips have met eachother passionately, but in someways so sweetly. With that finger you have make me see another part of me that i still didnt knew. By now, the crystal light was faded, but around us there were our own lights and they melting eachother. You was looking at me so deeply and seemed you wanted ask my permission. I just nodded. Sweetly i felt your penetration, and while you was penetrating me, you have moan of pleasure and this it made me flight. Your movements were slow at the begin, but while i was feeling your desire growing up inside of me, they were became always more fast. You have blocked my arms lifting them up to my head. You was looking at me and i was looking at you so passionately that we thought to be lost. Your movements were becoming always faster. We looked at eachother for a second without breathe. Another little quick movements and together we have reached the orgasm. Our hearts were pulsing blood so fast that we thought to faint. The contractions made us feel still the pleasure of the orgasm that slowly faded. We remained breathless. You was looking at me and you was about getting out from me, but i stopped you. I wanted feel you still inside of me. The sensation of you inside of me, it was one the most magnificient feeling i could feel in that moment. We were two bodies in one soul, and we remained so, looking at eachother, i dont know, even me, for how long. I caressed you face and you, between kisses and slow movements and my little moans, have whispered sweet words that seemed tiny poems.”

“In that atmosphere ⇒