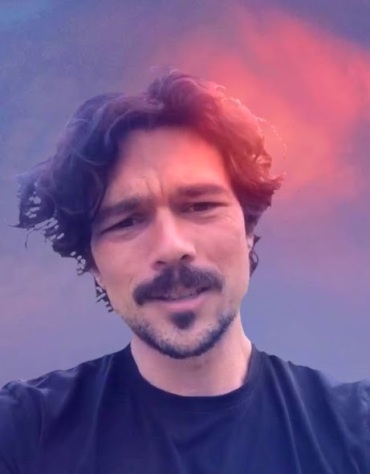 Our breathe were mixing one in another and our glances were the most beautiful thing that we were looking at. Our heart were beating hard in the silence of the room.
Slowly i fallen asleep on your chest, while you was still looking the colors in the sky.
Sweetly the moon was taking the place of the sun, and our colors were creating a kind of  nothern lights up in the sky, and you was looking at it, thinking still what i’ve told to the furry animals. Your heart has started to beating fast. Your emotions were high and you was looking at me sleeping and those colors only could expand your emotions around us.
Me, asleep, i was wrapped again by your feelings and the only thing i have could do was whisper your name and your have replied me whispering mine.
Slowly you have closed the eyes and sweetly you fallen asleep too.
That night we called eachother many times, as we had really needed, even unconsciously we didnt have realized it and each time we have done, we have feel our bond got bigger and bigger. Even if we were fallen asleep, our emotions filled our hearts and slowly we have realised that we have take our hands one in another. Delicately we have open the eyes at the same time. Face to face. We looked at our hands. They were still one in another. We remained in silence to looked at them and then we looked at eachother without speak, while outside was still dark, but from far we have could the first bird sings.
We shyly smiled eachother.
We were together from that night i was fallen in the bar, but certain glances were like the first that we had shared. So insightful that they made me feel withouth breathe and i had to take my eyes off you.
But immediately after you have lifted up my face toward your eyes. In a second i have could see all the love that had builded Our Parallel World, and all my shyness’ gone.
You was looking at me profoundly and it seemed that you didnt wanted broke that moment, but you had something to say me. You did it in the sweetest way you knew. In a whisper.
‘I believe they will do the jump tonight…’.
Then we stared us, as if we were suspended.”