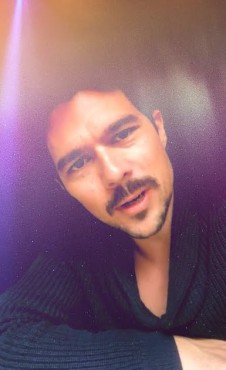 Still in the air, in the middle of this magical twirl.
We were surrounded by a soft cloud, and we were tightening.
Our faces softly were touching themselves, our hands were along the hips. It was like, as if we relived the magical dance, but this time we were in our parallel world and we had fought against The Nothing, and we didn’t know if we were awake up or if we still dreaming.

Everything seemed so real.
Our emotions were expanded at the maximum, and also if we were dreaming, we were feeling something more big than us surrounding.

We were still flying in the air inside of soft cloud, and that thin cloud was like a little swirl, that, from our feet, went up to the sky, and it made us fly, in the sky of our world, we did not take us our glances off, and our fingers has crossed, one in another.

The air were becoming again how it was usually: light, on the contrary it was more crystalline, and more we had breathe, more our connection was stronger.
What we were leaving behind us, was a backyard, that slowly, was disappearing with all our big fears that were going in flames.

We didn’t wanted to leave us: in our touch, we were feeling something that bonded us always more, but something were dividing us.
Just at end we had realized the we were still in that dream, and the Morgur were looking for to wake ourselves up.

Slowly we had opened the eyes, and we had still our hands one in another, with the fingers crossed.

The little eyes of the Morgurs were set on us: they were checking that we were good. They were jumping around us.
We had caressed them to assure them that we were ok.
While they showing their happiness, for a long minute, we were looked at each other, and we had shared a shy smile.

The fingers were still crossed one in another, and that sensation still floated around us.. in us.”