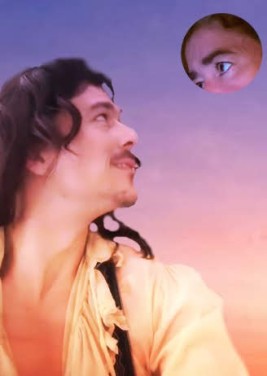 Ourselves that kiss, as if was the last of our life. We had our eyes closed, but around us was happening everything, but we knew if we had open the eyes we would see something that it would be destroy in front of us and we would remain suspended between two worlds.
We were feeling like a light warm wind wrapping ourselves, and we were flying in the middle of this cyclone, made of our lights that melt themselves with other and new emotions.
We couldnt, to open our eyes but we could see all this, we didnt know how. But we have could.
Around us was a moltitude of colors that ran around
We could even, see all our magic stones that danced around us and every symbols we had see said us that we were going in a world that we had always desired. We had see above all Algiz, Thurizaz, Gebo turning around us. The very first magic stones we had see during the first hours we were together.
Then, they had left place to others amongst which Uruz and Hagalaz.
Everything this, while we were going trought the pathway, almost flying thank to a force that we had inside of us but we had no ever realized of that.
We still given ourselves many kisses, and we knew to continue till we wouldnt be arrived to our destination.
We were  flight in a cloud, and that cloud was bring ourselves from the world we knew to this new place, still unknown, but we had know, was the place where everything would been magic, and there we would find something more about our past and  we would have could see something about our future.
In meanwhile we, still given ourselves kisses. We had even still, our eyes closed.
We were about to arrive, we were feeling it. Our emotions made themselves more big. And, as if something had whispered ourselves to open our eyes, we slowly opened them, and what which we had seen, had left us stunned.”

“When we had ⇒