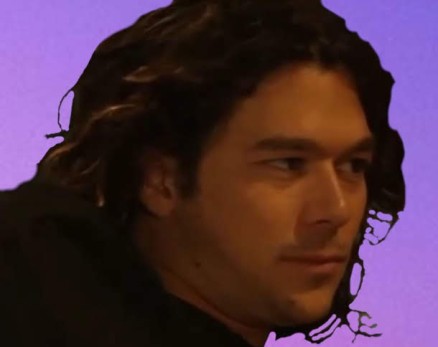 Realize that we had finished all the sandwiches, that you had prepared.
Since when it was began everything we had eat more or less just the breakfast, or even no.
You have placed the tray on the floor, then you was settled next to me and you have started to look at me.
Your eyes were stared at me, while your hands touching me softly the legs, the hands, the belly. And i have left you do it, while i looked at you in silence,  i’ve dived myself in my thoughts, that were a millions, but just in few words, i could explain them.
Your voice, broke this moment with a question ‘What are you thinking?’
I’ve awake up from my thoughts sweetly. I have touched your face and i have said you ‘It could be stupid, but what i see in your eyes is the most beautiful place in i want to stay’, and while i was saying this i’ve sweetly touched your little neo under the left eye, without realizing of that. You remained without words. Then, after a little bit, you have said me ‘Never a woman, neither my ex, has spoken to me so’. You was approaching slowly. You have take my hand, and you have kissed it softly.
You were about to kiss me, but you stopped yourself a moment. We were looked at us, one in another, in that fragment, we have collect all what we were feeling.
In that exact moment, we were in our world, made of sensations and feelings.
We were kissed us, and it was as if we fly.”